John Goerzen: Springtime in the Mountains

The scene: early one morning as the sun has just started to rise. Jacob and Oliver, ages 7 and 4, are the first people to wake up in the house their grandparents in California, where the four of us are visiting for the first time as a family. They have a conversation and decide that would be a good to go find a mystery. They decide to take their flashlights pink and blue, matching each boy s favorite color and slowly, but not very quietly, open their bedroom door and creep out. Brother, you forgot your flashlight! says Oliver. Oh, thanks brother! I ll get it! says Jacob. Meanwhile, Laura s mom wakes up, and notices two boys with flashlights creeping through the living room. Pretty soon they reach the kitchen, open the dishwasher, spy a suspicious-looking bowl, and decide that they have found the mystery a clean bowl! Or, at least that s the story that I pieced together based on what a 4-year-old and the grandma he awakened told me. We were on our first family trip to the Fresno, California area, to visit Laura s parents Jacob and Oliver s new grandparents. They ve played together before, but as this was our first visit to their place, there was quite the excitement. The boys had flown before, but it was several years ago and neither of them remember it well, so they were excited about that, too. The night before, Jacob woke up to tell me Dad, I am too excited to sleep. I think I will go downstairs and watch some TV. He didn t get too far with that plan. But he was excited. We went through security at the laid-back Wichita airport (where the TSA agents smile and there are often no security lines at all). We found our gate with enough time to grab lunch, which we did. The boys and I then did what we often do to kill time: explore. We explored the terminal, watching carpet-layers cut out carpet for the jetway, watching the construction of the new Terminal 3 out the window. And, of course, watching airplanes take off and land from the terminal s large windows. Finally it was our turn to board, and we all got on the plane: Jacob and Oliver with their backpacks of on-board activites, Laura and me with the rest of our carryon luggage, for the short trip to Denver. Jacob and Oliver s noses were pressed against the windows. Or, well, Jacob s was. Oliver s window was a little too high for him, but he was thrilled anyhow. They delighted in the airplane snacks, and the fact that they were allowed to drink pop on the plane. We packed books and some new art supplies for them (colored post-its, pages from a train-themed page-a-day calendar, a notebook, and a set of colored pens really seemed to do the trick.) 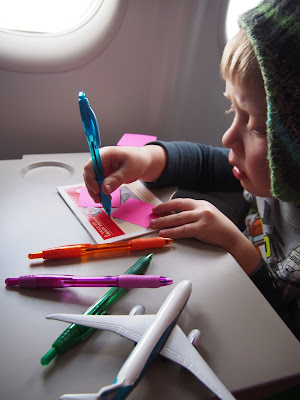 We had a choice of 35 minutes or 4 hours between flights in Denver, and I had chosen 4 hours, thinking that would be a lot less stressful with boys. And it was. We found a nice corner of the mezzanine to sit for awhile they did art projects and played a game with Laura. Then I took them exploring Denver. We rode the moving sidewalks up and down the terminal, took a train ride to another terminal and back, ate supper all together, and flew to Fresno. We had stopped in the Wichita airport to buy them each a souvenir airplane, and these came out often during the rest of the trip. 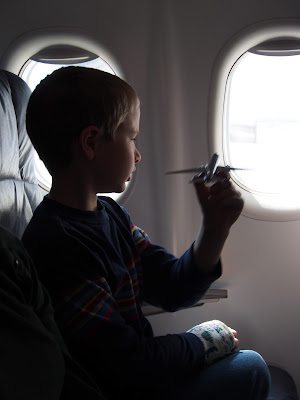 They enjoyed the mockups of the sequoias in Fresno Yosemite International Airport, enjoyed their beds and their room at the house, and did actually manage to fall asleep eventually. We had a few days there, where they played in a park, with bubbles on the patio, or croquet in the yard (I even discovered Jacob happily using the cast his broken arm is in as a hammer to pound the hoops into the ground!) 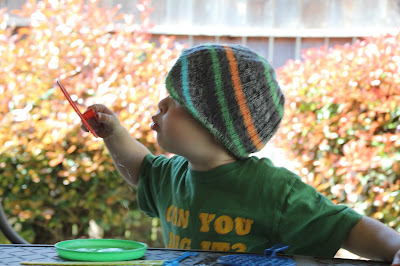 There are a lot of miniatures in the house, and the boys enjoyed exploring the dollhouses and especially the N-gauge model train. Jacob enjoyed it so much he asked me to record a video of him playing with the trains. 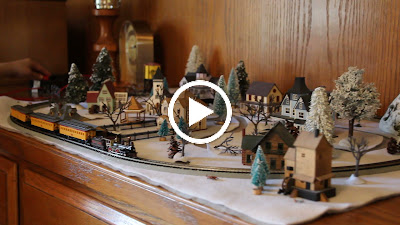 Evenings often brought book-reading, from the many children s books in the house. At home, Laura and I and both boys often scrunch onto an oversized chair and read a book and sing a song (one I make up on whatever topic they choose). Over there, we often had Laura, Jacob, Oliver, Laura s mom, and me scrunched up somewhere while the boys heard a story read to them by their grandma. That happened plenty of times other than bedtime, too. (Or Jacob would take his favorite books and read them to himself.) 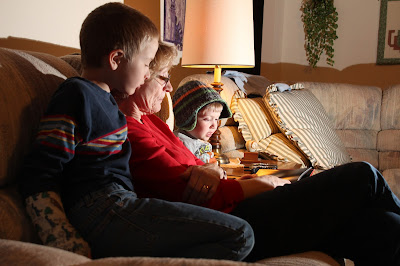 Laura s parents organized a reception Sunday for us, for the people from that area that couldn t make it to our wedding. Jacob and Oliver, predictably, had fun playing and even talked to some of the adults. The adults that didn t ask Jacob about his cast, anyhow (he dislikes talking about it). The boys discovered a live mic at the church where the reception was, and do I detect two future pastors in our midst? 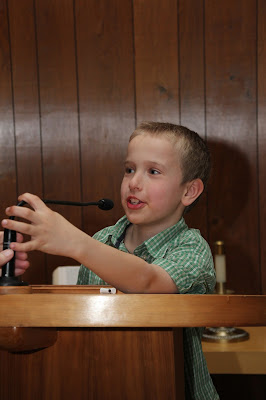 We had a great time at Laura s uncle and aunt s place. The boys were happy to discover an orange tree in their backyard, a tetherball post not far away, and an uncle ready to give them a demonstration of a swimming pool vacuum cleaner or sit at the piano with them. Jacob s favorite part, though, was when the hamburger buns his great uncle were toasting were left on the grill during the prayer before the meal, got a bit scorched, and the uncle remarked with a chuckle that I guess the Lord was tired of listening to me drone on! Jacob loved his meal, and cackled at the thought of a prayer causing buns to get scorched. But their highlight was the visit to the sequoias at Kings Canyon National Park the next day. The excitement had been building for that day all weekend. On the way out, we stopped at a fruit stand and bought some delicious strawberries the fresh, juicy, sweet and tasty kind that are red all the way through. We continued up through the foothills, stopping periodically to get out and stretch, look at the sights, take some photos, or borrow grandpa s binoculars. 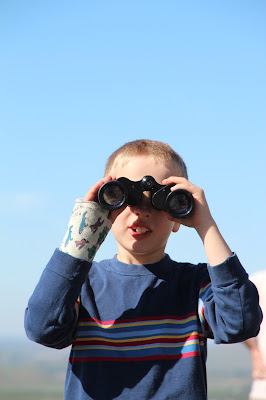 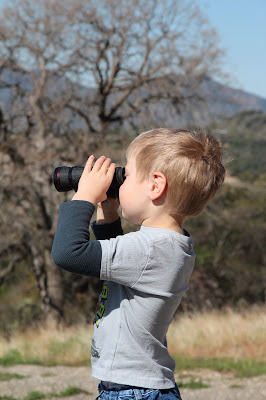 I knew we d be traveling in two cars, so I had the thought to pack some 2-way radios before we left. I gave one to the boys and one to the grandparents. All weekend long, whenever the six of us went somewhere, the boys (and especially Jacob) would give directions to the car that was following. Turn right! The light is green! Catch up, you re going too slow! So all the way into the mountains, Jacob would send back instructions on what to do. We saw Grant Grove, home to the worlds third-largest tree (267ft/81m tall and 3000 years old). It s quite the impressive tree the trunk s diameter near the ground is 29ft or almost 9m. As we walked the trails, their speed kept increasing as they were hunting for the tree tunnel I had told them about a tree that fell centuries ago and had been hollowed out to make a home. That trunk was easily 8ft or more in diameter, and I could stand up completely in places. We found it, to much delight from the boys So this is what it s like to be inside a tree! 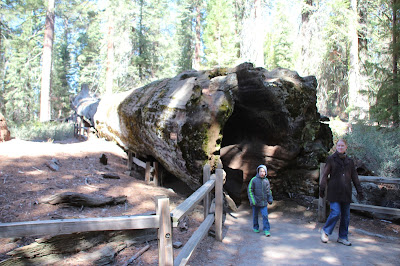 Our trip home brought a delay in Denver and a missed flight, which excited the boys when I told them now we get to eat supper in the airport! I wonder how long that tactic will work But Jacob was also excited because the plane we were put on in the end was bigger than the one we were scheduled on, so that was another piece of excitement. We got home, and I carried two sleeping boys in from the car, upstairs, tucked them in, pulled off their shoes, and put their favorite stuffed animals in their arms. They were happy to be home, and with memories to treasure for a long time.

Petter Reinholdtsen: Lenny->Squeeze upgrades, apt vs aptitude with the Gnome and KDE desktop

I'm still running upgrade testing of the Lenny Gnome and KDE Desktop, but have not had time to spend on reporting the status. Here is a short update based on a test I ran 20101118. I still do not know what a correct migration should look like, so I report any differences between apt and aptitude and hope someone else can see if anything should be changed. This is for Gnome: Installed using apt-get, missing with aptitude

This is for KDE: Installed using apt-get, missing with aptitude

OpenStreetMap party at Kaohsiung, Taiwan Apparently, yesterday we had the first OpenStreetMap event in Taiwan! We met in a caf /restaurant equipped with power plug, wireless network and overhead projector and we had a bit of an introduction, chat and lunch. Then we split in groups and exploited the fact that the newly built underground (KMRT) system is still free of charge, to spread around and map around the stations. Finally, we reconvened at someone's house to see how to put the data together, draw roads, tag and upload. Highlights of the day: Technical bits: Issues to address: