So much for my monthly blogging! Here s what I have been up to in the Open Source world over the last 6 months. Debian Ubuntu Other Plan for December Debian Before the 5th January 2017 Debian Stretch soft freeze I hope to: Ubuntu Other

Debian has recently received a donation of 8 build machines from Marvell. The new machines come with Quad core MV78460 Armada XP CPU's, DDR3 DIMM slot so we can plug in more memory, and speedy sata ports. They replace the well served Marvell MV78200 based builders - ones that have been building debian armel since 2009. We are planning a more detailed announcement, but I'll provide a quick summary: The speed increase provided by MV78460 can viewed by comparing build times on selected builds since early april:

Qemu build times. We can now build Qemu in 2h instead of 16h -8x faster than before! Certainly a substantial improvement, so impressive kit from Marvell! But not all packages gain this amount of speedup:

webkitgtk build times. This example, webkitgtk, builds barely 3x faster. The explanation is found from debian/rules of webkitgkt: The old builders are single-core[1], so the regardless of parallel building, you can easily max out the cpu. New builders will use only 1 of 4 cores without parallel build support in debian/rules. 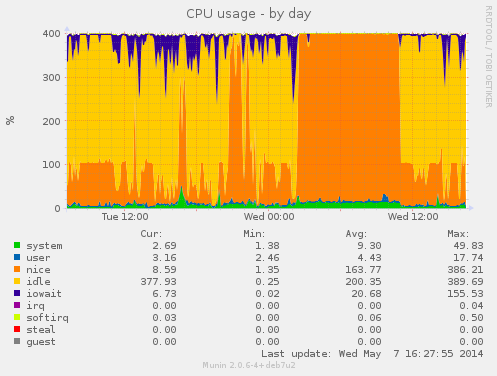 During this buildd cpu usage graph, we see most time only one CPU is consumed. So for fast package build times.. make sure your packages supports parallel building. For developers, abel.debian.org is porter machine with Armada XP. It has schroot's for both armel and armhf. set "DEB_BUILD_OPTIONS=parallel=4" and off you go. Finally I'd like to thank Thomas Petazzoni, Maen Suleiman, Hector Oron, Steve McIntyre, Adam Conrad and Jon Ward for making the upgrade happen. Meanwhile, we have unrelated trouble - a bunch of disks have broken within a few days apart. I take the warranty just run out... [1] only from Linux's point of view. - mv78200 has actually 2 cores, just not SMP or coherent. You could run an RTOS on the other core while you run Linux on the other.

thanks to lucas & his trainees, we're seeing archive rebuilds & tons of new RC bugs again. besides that, there are still some patches in the BTS. here goes my list of recently worked on bugs; most of them in the pkg-perl group

Angie has my old laptop that some might remember from a couple Ubuntu developer summits. Adam Conrad used to refer to it as the surfboard: a lovely 15" widescreen laptop. It's my test machine for Ubuntu updates and so far I'm loving Karmic. This machine has been continually upgraded since either Hoary or Breezy without a reinstall.

Jaunty was miserable. Bugs in the Intel drivers meant that DVD playing stopped working, sounds would occasionally lock up, and things were just painfully slow. Karmic to the rescue. I did the update at beta time like I usually do, and without any further effort:

I then added the dev channel of Google Chrome, which imported all the Firefox bookmarks and started to remove some optional things that Angie doesn't use anymore and don't run well on the now 5 year-old laptop. I took out openoffice, a pile of -dev packages that were leftover from when I used to build glibc on this thing (This laptop had the Hurd running on it at one point... *g*), and then discovered the System->Admin->Package Cleanup (Or at least, it's called something like that, the laptop is in French) where I could start to remove unused packages. I did a few rounds of that, some apt-get autoremove. I took universe and multiverse out of the packages list and did some more removals, making sure to leave in things like deborphan and the gstreamer packages that are in universe and multiverse. Lastly, I did a round of deborphan to take out some pieces that were just hanging out.

As a final step I've updated to grub2. I don't have a separate /boot partition on this machine, so I haven't been brave enough to convert it to ext4 yet.

The boottime at this point still feels a little long for what this laptop does. While at Canonical, I played with some appliance configs and had from kernel load to running firefox in a dozen seconds or some. This laptop doesn't have anything I'd see as unusual for daemons - there's no mysqld, sshd, or anything unneeded like that. But to have everything Just Work(tm) at this stage is amazing.

update: Angie's asked me to figure out why the screen saver kicks in after 30 seconds instead of 10 minutes like it's set to. But still, if this is the worst that goes wrong with this release, then it's still a wild success already at Beta.

Went through a tricky upgrade from Apache 1.3 to Apache2 on debian-apache. Somehow the init.d script went missing and all hell broke loose. ;) Thanks to Adam Conrad for helping me out.